This candidature includes the whole cultural common heritage to Galiza and Portugal, common culture with roots in the Pre-history and that is still alive in spite of the physical borders between the two countries that present this candidature, Spain and Portugal. 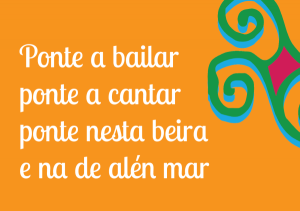 The Galician-Portuguese traditional culture has unity and similarities which show that this common culture is obstinately faithfully to the past but that, nowadays, with the quick social changes, is in danger of dissappearing.

The origin of this intangible heritage is in the region that Romans called “Gallaecia”, and historic events motivate its presence in the whole territory called nowadays Portugal, and in other parts of the world as well, due to colonization and emigration.

It’s a fact that the elements of the Galician-Portuguese intangible heritage are more visible in the different phases of the annual cycle, represented in a symbolic way by the four seasons of the year. Oral expressions such as the language, folk songs, traditional arts, music, traditional dances and festivals and rituals are present in both communities the whole year.