Ten years after taht first try, promoted by schools in both countries, the association, Ponte…nas Ondas!, has started a campaign to get support from the Spanish and Portuguese governments for the inscription on the Representative List of the Intangible Cultural Heritage of Humanity.

The multinational proposal, Galician-Portuguese Oral Traditions, refers to a distinguishing mark of the cultural expressions from the regions of the North of Portugal and of Galicia (Spain), which characterises them as a single unit of social and symbolic practices, of which oral tradition is an original expression. This oral tradition links it to material and symbolic expressions in the North-West of the peninsula because here it has a reason to be, and here is the place of origin of the resident human communities, who are conscious of the importance of this world of orality in the formation of their cultural identity.

The exceptional nature of this proposal resides in the fact that it is witness to a past and to a present which goes beyond political frontiers, through a sense of belonging to a common culture put in doubt by rulings throughout history and by changes from contemporary society and which the experience of new contacts rekindled and its safeguard was called for. Regardless of the fact that some components of the traditional culture are also present in other parts of the Peninsula and of Europe, the fact to be highlighted is that in this geo-cultural area said components acquire special significance.

The regions of the North of Portugal and Galicia still retain a collection of social practices and an oral tradition which, in some way, makes them different when compared with the other Portuguese and Spanish regions. The cultural traditions transmitted here from generation to generation are a common heritage of the social communities who lived in this area over the centuries. The oral cultural heritage of these communities is marked, not only by the many contributions inherited from different participants, but also by the geographical and ecological characteristics of the region.

The sub-region of the North-West of the Peninsula, over and above all the plurality and variety of cultural expressions it may present, is characterised by its esteem for a collection of common cultural traditions whose justification may be found both in the historic process which established it, in the common language shared and in a highly characteristic ecological context. The North of Portugal and Galicia present a collection of ecological determining factors which find very similar socio-cultural expressions resulting in that they make up a cultural sub-region.

The geography and the ecology of the territory not only make it unique but also obliged its inhabitants to adopt particular economic strategies which interpreted and renewed their symbolic world. The relationship between the territory and the senses of the communities’ experiences, and the appropriation of the same by said communities is one of the most defining characteristics of the cultural heritage of this region, of which oral tradition is a living witness. The continuity of oral traditions and of social and material practices associated with the same in the North-West of the Peninsula is what is being proposed for the content to be considered as immaterial and intangible heritage. 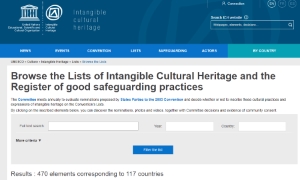