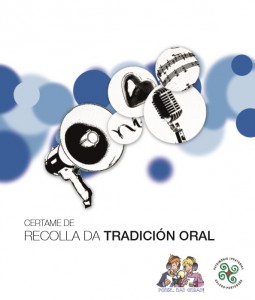 The first edition of the Galician-Portuguese Oral Tradition and Intangible Heritage Collecting Contest (Certame de Recolla da Tradición Oral – Concurso de Recolha da Tradiçao Oral) was a direct consequence of running for the Galician-Portuguese Intagible Heritage before the UNESCO. The edition was, moreover, framed by the I Week of Oral Tradition Literature, which took place in November 2006.

The aim of the contest, as mentioned previously, was encouraging students and teachers to collaborate preserving the Galician-Portuguese intangible heritage as well as promoting and spreading expressions which are still alive in the Galician-Portuguese tradition. The ultimate purpose is seeking to forge a closer relationship between the students and the intagible cultural material surrounding them.

The material would be rendered in digital format (audio or video). It could be either prose (myths, legends, tales, oral stories, tongue twisters, riddles…) or verse (romances, stories, blind romances, prayers, proverbs…).

On the other hand, along with the contest other activities were developed such as didactic courses on oral literature carried out by oral narrators as Avenilo González, Anxo Moure, Celso Sanmartín, Fátima Fernández and Cándido Pazó. Training courses for teachers were also brought about by experts on oral literature as Antonio Reigosa and Xosé Miranda.

Forty one works from the Euroregion were competing in this edition: twenty for the Primary School Category, fourteen for the High School (first four years) Category, three for the High School (two last years) Category and four from the Professional Training Category. The jury of the contest was formed by experts such as Xosé Ramiro Cuba and Antonio Reigosa, as well as Gerardo Feijóo, on behalf of the association Ponte…nas ondas!

As stated by the jury, the high quality of the works (the methodology and the execution) was remarkable and hence, getting to a final result was hard for the jury. In the end, those were the winners:

Primary School Category
1º Prize: CRA Amencer from San Paio (Ribadavia, Ourense)
For the precise structure, the dedication of the students and the development of the third stage of the project, in which their relatives and neighbors went to the school to sing and tell stories. (Click here to access the material)

Primary School Category
1º Prize: Escola de Ensino Básico Celorico de Basto – 10 to 14 years old – (Portugal)
For responding precisely to the spirit of this edition providing that the students demonstrated the didactic use of the material, through their work and through the collection of it. (Click here to access the material)

2º Prize: CPI de Xanceda (Mesía, A Coruña)
For the broad participation of students and teachers in the project and for rendering interesting audio material coming from many different people. (Click here to access the material)

Mention: we want to make a Special Mention to the work “Refraneiro” (Proverbs), presented by CEIP Pombal from Vigo, since the didactic application of the proverbs collected by the students and implemented at school was highly interesting. (Click here to access the material)

High School Category (first four years)
1º Prize: IES Francisco Sánchez (Tui, Pontevedra)
For the work “Cantamos e contamos no Francisco Sánchez” (We sing and we tell stories at Francisco Sánchez), due to its exemplary structure and its presentation, as well as all the examination done on the huge variety of the collected material; the precision of its classification and the high participation of students in different stages of the process. (Click here to access the material)

2º Prize: CPI Alcalde Xosé Pichel (Coristanco, A Coruña)
For the work “A tradición oral en Coristanco” (The oral tradition in Coristanco) and the methodology used. For transcribing precisely and classifiying the collected material and for studying the features of the works at school and, subsequently, carrying out a fieldwork. (Click here to access the material)

High School Category (last two years)
1º Prize: IES Aquis Querquernis (Bande, Ourense)
The topic of the collection was the most interesting part of this work since it was focused on oral history about the Civil War and the Postwar period. (Click here to access the material)

Professional Training Category
1º Prize: Professional Training of Cultural Animation at IES Primeiro de Marzo (Baiona, Pontevedra)
For the huge variety of the collection, the quality of the most part of it and for several interesting audiovisual materials rendered. (Click here to access the material)

Vocational School Category
1º Prize: Vocational School Infante D. Henrique (Porto, Portugal)
For interpreting accurately the spirit of the contest because they showed, either by the work of the students as well as the by the collection of the material, the different didactic possibilites of it. (Click here to access the material)
AWARDS CEREMONY
The awards ceremony was held on November 13th 2006 at the museum Verbum: Casa das Palabras. The oral narrator, Cándido Pazó, attended and made a few interventions on the different forms of the Galician-Portuguese intangible heritage. Moreover, on behalf of the jury, Antonio Reigosa, writer and researcher on oral tradition and designer of the website Galicia Encantada, made an intervention stressing the importance of transferring the material to the new generations.

The award-winning students and teachers attended and collected a prize granted by the regional department for culture, Consellería de Cultura, along with a sculptural figure made by the artist Antón Román for this special ocassion. Other guests in the ceremony were Mr. Xesús López, culture councillor of Vigo and Mrs. María Xesús López Escudeiro, provincial delegate for culture.

*****In the coming days, you can check here for the rest of the material sent to this first edition of the Galician-Portuguese Oral Tradition and Intangible Heritage Collecting Contest